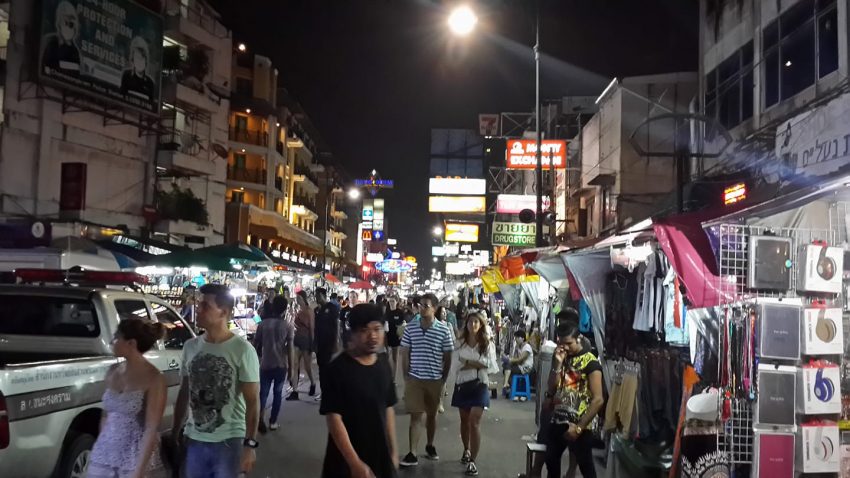 This is the notorious Khao San road of Bangkok. Only one block away from the Chabad House where we celebrated Simchat Torah, this road is where young tourists, mostly backpackers, hang out.

It is where all the actions are supposed to be: loud music, alcohol, drugs and available women. It seemed to me that it was more than just the center of Bangkok’s hedonistic life style… It was more like a nest of vampires or demons, or both.

Closer to midnight, crazy offers are made on the streets to passersby: services by beautiful ladyboys or female sex workers — the choice is yours, if you can distinguish one from the other… street delicacies from hell on skewers – scorpions, cockroaches, centipedes, beetles, and other creeping creatures you can think of that are usually the favourite meals of Hollywood’s demon possessed characters in movies,… or your “regular” barbecued sausages made of pork or dog meat.

Locals offer their menu on the streets, trying to lure new customers to their dimmed lit bars. A fascinating restaurant and bar was designed like an endless stairway leading up to an unseen top. Each landing had a few sets of tables and chairs. The entire place was lit by the lamps located on every riser part of the stairway, creating a view from the street of moving shadows and silhouettes of the guests sitting at the tables. I wondered if at the top of the stairs, Count Dracula was sitting on the throne, waiting for his next meal to be delivered.

From the loud thumping music to drunk obnoxious westerners… to all of the above, this road was more than a party scene… It was the perfect setting for missing tourists… Probably dead by charming blood sucking ex humans, waiting in the darkest corners of Khao San.

This picture was taken by me, right after Simchat Torah, yes, it was early evening at 7pm, when there were not much actions going on yet. I wasn’t going to wait till later, when the demons and vampires were already out.