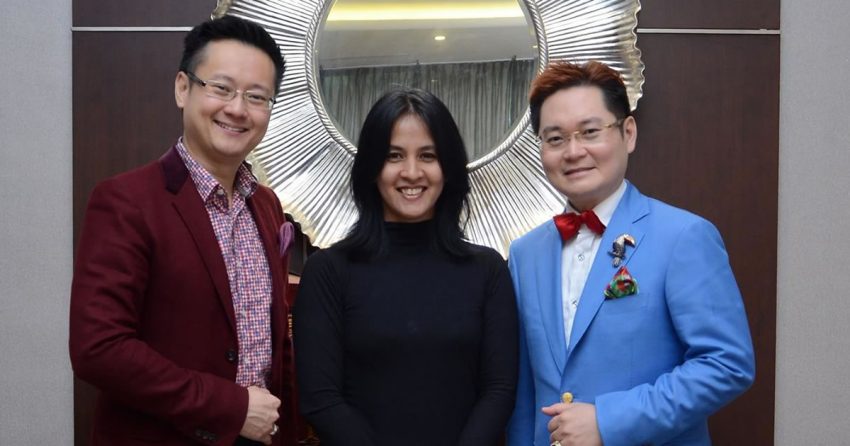 The following is an article I wrote for the Indonesian fashion magazine REGISTRY, based on my interview with the Tan brothers of Singapore. It was published in the September 2016 issue.

Having encountered the dynamic duo in person – the Tan brothers of Genesis-Global, purveyors of ultra-luxurious gemstones and jewellery – it was very clear to me that, the brothers were contrastive, yet complimenting each other. The younger Tan, Dennis, is the heart of the company, filled with endless passion for rare gemstones, pumping life into the business. The elder one, Kelvin, is the sophisticated, driving brain behind the growing success.  Kelvin had been a high-flying corporate lawyer for an illustrious 16 year period, accumulating extensive experience in the legal business.

When he was only a student, Kelvin had already developed strong opinions regarding the Paper Money Economy, but it was only as a lawyer, did he actually delve into the financial services sector. Numerous times, he was appointed as chief legal counsel of various renowned multi-national companies in Singapore. Through his work, analysis and experience, he decided to act upon the world’s money system today which is unsustainable, and changed the course of his life. “The world is a cruel place when it comes to choices of investments today,” he explains. “It punishes the saver and rewards the debtor. And that kind of addiction to debt is unsustainable.” Elaborating on his point, Kelvin digs deeper into the matter, “The problem is that a lot of Central Banks in the world, a lot of governments in the world, tend to promote addiction to debt. They themselves have no solution, and are creating more debt to try and solve the problem.”

He showed grave concern for the people today with lack of sense of direction as to where to put their money and savings. It was Kelvin’s scepticism in fiat currency and its derivatives, such as stock options, futures contract and so on, that has turned his investment choice to precious stones. From collectors of commercial jewellery, they have risen to purveyors of rare investment gemstones to offer people an option of an eternally reliable way to invest. “Gemstone is a very precious commodity,” Kelvin explained. “It is mother nature’s gift to mankind. You can not manufacture a stone. We’re talking about natural stones. Only mother nature can produce them. Nobody can recreate them.” Taking into account their divinely created, natural and eternal value, Kelvin refers to gemstones as “God’s money”.

The Tan brothers have always believed this from the beginning, and everything just fell into place for them. It just happens to be that younger brother, Dennis, had eyes for gemstones, which he imparted to Kelvin. And it just happens to be that Kelvin was not only a lawyer but had training and experience in the financial service sector which shaped him to become financially savvy. Marrying the two together, passion for gemstones and financial knowledge, Kelvin created a million dollar financial instrument: an alternative form of investment, by transforming traditional life insurance policies, instead of written on paper, to be written on stone. “So instead of holding useless paper that has no intrinsic value, the life insurance plan will be written on a precious stone that in it of itself has very high intrinsic value,” he claims, “and every year, it goes up in value.”

Genesis-Global works together closely with insurance companies and private banks. These companies will be able to sell their own financial products, backed by the gemstones. Another pillar of investment is using the gemstone as a security collateral to raise a loan. And this loan can be backed against the value of the gemstone at –at least– 75 percent of the value. “We have the ability to facilitate the raising of a private loan for that purpose,” said Kelvin.

Kelvin’s gemstones are sometimes so rare, and therefore so high in value, that even the big brands of gems do not have it. The reason is because they work closely with a lot of mine owners in Sri Lanka and Burma. “We have the First Right of Refusal to get the best stones into the system of investment that I have created,” Kelvin explained. “So basically, my company has long standing dealings with these companies, by giving them a lot of businesses. And they have the ability to support my company in this way.”

Although his major game is playing at the level of the top 1 percent rarest gemstones, Genesis-Global also caters for gemstones in the US$50,000-a-stone category. This level is the sensible starting entry-point of investment, which Kelvin predicts would be affordable for Indonesians. “We have potential in opening an office in Jakarta,” he said, “Jakarta has a lot of potentials because a lot of people have already a lot of wealth. They are used to putting their money into traditional forms of financial investments. It is time for them to pay attention to an alternative class of investment such as gemstones. A lot of them do not even need a lot of education about gemstones. They have quietly already been collecting.”

Below is an interview between Kelvin Tan and CNBC, mentioning the US$10 million worth 48,95 carats “star of Genesis”.